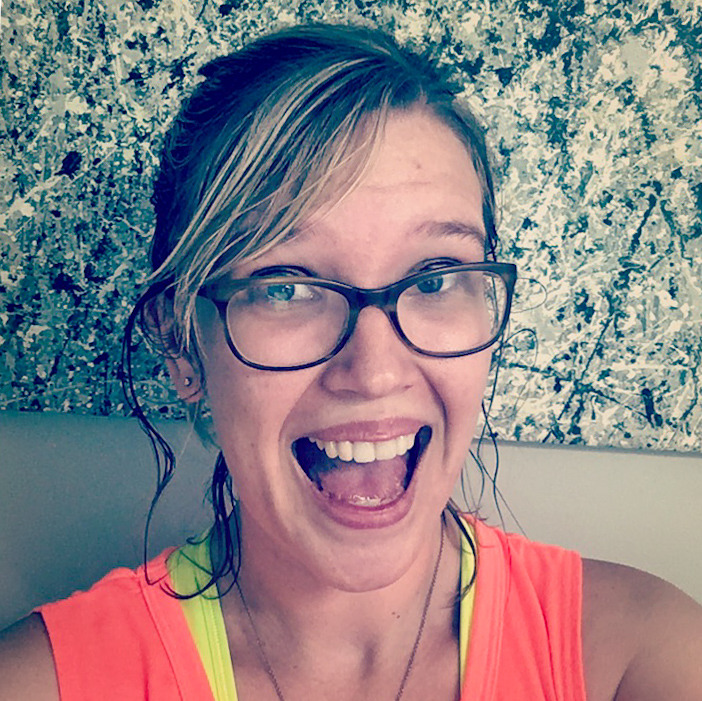 I have never been an athletic person. S**t I would even refuse to run the 20 min mile in high school. Sorry, no. Over the years I had eaten poorly and drank copious amounts of alcohol and let’s just say, I got a lil fluffy and extremely lazy. I had attempted to do the usual, go for walks, run on the treadmill, I even subscribed to a gym and hired a personal trainer. None of that panned out though because it was *work.* (Not to mention my trainer’s style was to literally scream what he called “motivation” at me which really just made me cry every day) I gave up thinking there was an effective way to lose weight while having fun and feeling good about myself. So, I quit the gym and I lived with the fluff. I owned it, it was me.

Then I discovered ZUMBA®!

Growing up I was always dancing. Not professionally but hidden away in my bedroom with the music cranked, I would attempt to replicate the moves I saw on TV, pretending to be a video girl. My dream job in life, and still to this day, was to be a Las Vegas go-go dancer.

I had heard of Zumba® before through social media and word of mouth and thought how fun! A workout that involves dancing?! I’m IN! So when my best friend asked me to attend a class with her it was a no brainer. Down. THEN, that b***h didn’t even show up. I was all alone, fluffy and out of place in my over-sized t-shirt and sweatpants, surrounded by fit women in their cute lil matching athletic outfits who looked like they knew what the f**k they were doing. I was so intimidated but I was already here so I decided to press on. I found a spot all the way in the back, closest to the door in case I had to make a run for it.

Finally, after standing for what seemed like ages alone and awkward in the corner, this short, fit, tan girl with flashy, colorful clothes strolled in and up to the front of the class. She seemed full of energy and ready to do the d**n thing. I liked her already. She introduced herself, broke down a couple of moves she mentioned they had been working on the last couple of weeks and turned on the first song. Everyone in the crowd seemed excited and started stepping to the beat, anticipating her first move. I followed suit. Next thing I knew the instructor was moving left, then right, then spinning and it was all happening so fast! I was so f*****g confused! How was I supposed to know which way to go!? That first song I went right when I was supposed to go left, put my hands up when they were supposed to go down and said “sorry” at least 15 times for bumping into the ladies next to me and that was just the warm up. I was mortified but determined to see the class through.

Song after song of reggaeton and Latin music I didn’t understand bumped through the speakers and we single, single, doubled our way through each and every one of them. While I had never heard a single song that was played, I was grateful it was all upbeat and fun music; music you definitely wanted to shake your a** to.

About half way through class with a huge boob sweat stain smack dab in the middle of my neon orange t-shirt, dripping wet and clearly looking like a hot mess, I started catching on. It was becoming FUN! I started to realize the moves weren’t overly complicated and every move was repetitive, so as long as you had half a brain you could anticipate what was coming next. And something about a group of women all dancing together in unison is enough to make me straight giddy. I caught myself in one of the 16 mirrors sporting a HUGE smile on my face that never seemed to fade. This was the most fun I had had in a long time; not just as a work out but in general. Plus not only was I having fun, it was WORKING! I could feel every inch of my body aching, lungs burning, legs weak, feeling like I may honestly pass out at any moment. I was using muscles I didn’t even know I had!

The class finally came to an end after what seemed like 3 hours of intense cardio. (It was 45 mins) We finished with a slow song and some stretching. I remember not even being able to bend all the way down to touch my toes. I wasn’t sure if it was because my fluff was blocking me or because my body felt like I had just undergone a war. My underwear was soaking with sweat, I was uncontrollably coughing because my lungs were on fire, and I was literally counting the seconds until I could go home and die on my couch but...I was STILL smiling!

After the instructor had thanked us all for coming everyone started bustling around, grabbing their items and hurriedly scattering. I stood there for a moment taking in all of my thoughts; I had such an incredible time! I felt amazing, rejuvenated, proud, skinny and excited to have found something that seemed perfectly catered towards me; an average female who isn’t obese but definitely not fit either, who is lazy and gets bored easily. FINALLY there was something that could hold my attention span and get me the results I craved!

What is dance fitness?

Pride Etiquette for our Straight Allies